A Dialogue between East and West 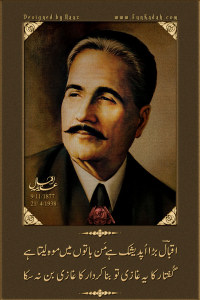 Sir Muhammad Iqbal (1877 - 1938), was a poet-philosopher whose vision of a homeland for India's Muslims makes him the spiritual father of Pakistan, the nation created in the partition of British India nine years after his death. Iqbal is also best known as an eminent poet, he is also a highly acclaimed "Muslim philosophical thinker of modern times".

By the time Iqbal obtained his bachelor's degree, he knew six languages-Punjabi, Urdu, Persian, Arabic, English and Sanskrit-three of them well enough to write world-class literature in.

In 1905, Iqbal left India for England to study modern philosophy at Trinity College Cambridge and law at Lincoln's Inn in London. To study Georg Wilhelm Friedrich Hegel, Europe's most influential philosopher in the original German, Iqbal went to Heidelberg in Germany in 1907. By his German teacher, Emma Wegenast he also read the works of the German poet Goethe. Iqbal wrote as answer to Geothe´s "West-Eastern Divan a collection of lyrical poems which is called "Message from the East". 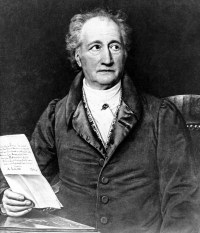 Johann Wolfgang von Goethe (1749 - 1832), was a German poet, scientist and philosopher. Goethe was enormously productive, and his works range from poems, dramas and novels to essays and scientific papers. Among his most important works also includes The Sorrows of Young Werther, Faust and West-östliches Divan, or West-Eastern Divan is a divan or collection of lyrical poems inspired by the Persian poet Hafez. 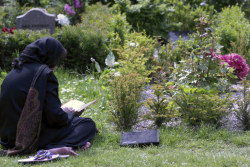 At the Muslim cemetery in Copenhagen, Denmark.

'If Islam means submission to God,
we all live and die in Islam's domination' 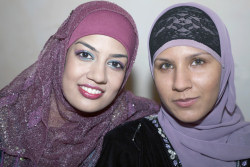 Saira and Mamouna ( from left) are of Pakistani origin and live in Copenhagen. They have been friends since childhood. Saria works in Pharmaceuticals. Mamoua works as a teacher.

"You are still tied to color and to race,
So you call me Afghan or Turkoman.
But I am first of all a man, plain man,
And then an Indian or Turanian". 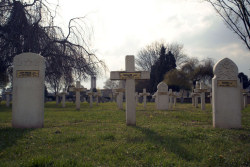 The League Of Nations
To the end that wars may cease on this old planet,
The suffering peoples of the world have founded a new institution.
So far as I see it amounts to this:
A number of undertakers have formed a company to allot the graves. 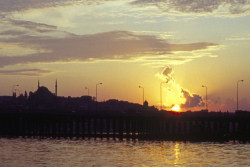 View of the European part of Istanbul.

To Allah belongs the East
And the West: withersoever
Ye turn, there is Allah's Face.
For Allah is Embracing, All- knowing. 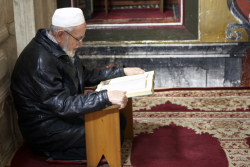 A Muslim reading the Quran at the Pasha Mosque in Tetovo, Macedonia.

Can the Koran eternal be?
I don't give it a thought!
Can the Koran created be?
I wasn't taught!
That it the Book of Books must be
I swear as faithful Muslims ought. 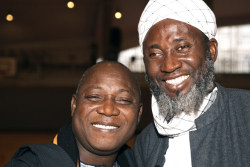 Imam Ashafa and Pastor Wuye (from right) lead a dialogue center for Muslims and Christians in Nigeria.

Love's music found its instrument in man.
He unveils mysteries, though himself one.
God made the world: man makes it beautiful.
Man is God's colleague and companion.